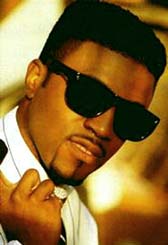 IN THE music industry it seems that new forms of music are competiting against old. Take Hip Hop for example. R&B artists dis hip hoppers, jazz vocalists poke fun at rhymes and drum machines. Nobody seems to like each other .. .or do they?

One producer who has made the successful crossover from Hip Hop into R&B is Teddy Riley, a soft spoken young man in his early twenties who got his start producing rappers from B-Fats to Kool Moe Dee and Heavy D & the Boyz.  Riley suddenly became a household name by working on Keith Sweat's "I Want Her", followed by a hit by Johnny Kemp. It's hard to find a day when he's not in the studio planning future projects with Stephanie Mills, Billy Ocean and the Jacksons. Riley also sings and plays music in his own soul group, Guy, and has been utilising singer and songwriter Aaron Hall to write lyrics for the song Michael might be singing with his brothers. Teddy explains: "One of the tunes that me and Aaron are working on now is called "2300 Jackson St". Michael Jackson is going to be singing on it. It will be on the reunion album, the brothers' first one since "Victory" from two years ago. As a group Guy is always writing for other people. Although, with our tour coming up, we don't know if we are going to have the time to work on the Jacksons because it has been taking a long time."

HE IS sitting with Aaron Hall and his brother Damien in MCA'S skyscraper in Manhattan. In the hallowed corridors outside, representatives of Rush Management run around for Eric B & Rakim, while members of Steel Pulse check in to confirm tour dates. MCA is a company that believes in diversification and with a producer like Teddy Riley they'll have plenty of hits rather than misses.

Although he now produces megastars, that doesn't mean he has forgotten his independent label and roots. "Hip Hop is a natural feel for me. Hip Hop is where I came from so it's really something I can do with ease. I wouldn t call any of the music I do pop or R&B or outright rock influenced. I usually just make the beats and take it from there.

"When I was in the U.K. working with the Wee Papa Girls Rappers, I decided to listen to everybody's favourite tune. Back then it was "Have A Little Bit Of Faith" by George Michael, so I made a rap cover of it with them.

"They came to me with another song. The movie, Fatal Attraction was out in America and it was about this lady who couldn't wash that man right out of her head, and I said, wow, maybe I should call it 'I'm Gonna Wash That Man Right Out Of My Hair'. And we used the original Broadway soundtrack from South Pacific. When they came to me with it, I said to myself, I'll make this a real hip hop tune."

Riley returned to New York after the Wee Papa sessions and started working on "I Want Her".

"People started coming to me after that, but it was really after I did Johnny Kemp that they took notice. On that record I really proved myself. I'm a producer now. Keith Sweat was luck. Everybody says that about your first hit... it's always luck. But your second is skill. Johnny Kemp opened the door for me."
BUT even though the door opened for Teddy, that didn't mean Hip Hop producers are being given the big break into soul and R&B.

"This won't happen to all Hip Hop producers because some of them don't play keyboards, some don't even know how to work a drum machine. All they know is that they have this idea and they give it to a musician and he tries to play what they've described. See, they only have their Hip Hop ears. Me being a Hip Hop producer and a musician means I can play what I'm thinking about and that is one way of getting exactly what you want."

Aaron Hall describes the way they've been working of late. "The first thing Teddy will do is he'll write some music. He may put music down for five songs a night. Then he'll say, 'Aaron — come and write and mords.'"

They've just finished writing two more songs slated for the , Jacksons' reunion LP, called ''She" and "You're My Kind", t are unsure whether they want to give them to the Jacksons or save them for the second Guy album. Teddy explains, "Because I have a reputation, I have to make all my songs good to keep my rep up. The thing about our songs is that they are good for Guy and good for everyone else."

It was Aaron who came up with the name for the group. He had been working in a department store with another singer when they decided to quit and try their luck in music. The next day Aaron was in the studio working with Teddy. He never thought about whether he would make it or not.
"Plus I said if I don't make it I can always do hair because my mom owns a shop," Aaron recalls. "I can do other things or I can go back into gospel. Everyone I used to play with are famous gospel singers now.

"It wasn't a big thing to me like other singers who leave high school and when they get older all they know is music. Not me ... I'll be happy until I die.
Teddy nods in agreement, "Money is not the object. It's really about what you want to do."

HALL attended school with Eddie Murphy, Flavor-Flav, Professor Griff and Chuck D at Roosevelt High School. Even though Guy may not be political, Hall says they welcome the new black awareness in music. "Black people have been kicked down for so many years. Now we control the record world and if we were to leave it would flop. Since we have that control, we want to hold on to it."

Teddy: "Music is a good vehicle to change people's perceptions because you hear it in stores, you hear it in cars ... wherever you oo you hear it. So everybody's style changes somewhat because of music."

After the next Guy tour, Teddy, Aaron and Damien hit the studio and start working on their next LP, which they promise will surprise everyone. Riley struggles to describe the sound he has been dreaming about.

"It will take us a little longer to do this album because we know exactly what we're going to do. Until we get the sounds that we want, nothing will come out."
"The next album," promises Aaron, "will be so baffling to the public that white, black, and brown — everybody is going to wake right up. It's going to be classical and jazz, mixed with funk and punk."

Riley, who is laughing now, gets the last word: "There's going to be everything in this album that everyone in the world is going to want to hear. Wow, I can't even explain It!" (Mala Halase Blues and Soul 520)