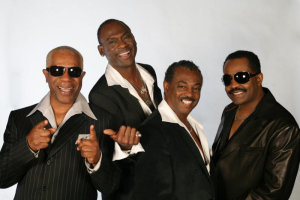 IN WHAT could justifiably be called their third incarnation, perennial favourites Kool & The Gang have undergone a pretty major personnel change. With the departure of James "J.T" Taylor, the group have drafted in not one, but THREE lead vocalists. As Robert "Kool" Bell, Dennis "D.T." Thomas and one of the group's new additions, Gary Brown reveal, the veritable musical institution is now in transition.
"With three different vocalists, we can pursue three different musical directions," says D.T. "We had our first decade which was a lot of musical experimentation with a lot of emphasis on a more instrumental sound and then the second phase which featured J.T.'s vocals and now we're taking both those elements and putting them together for this new cycle."     In keeping with the change, the group's "Everything's Kool & The Gang" was recently released. Aside from new tracks — "Rags To Riches", "Strong" and "Money & Power" — the LP contains some remixes and re-recordings of four Kool classics, "Jungle Boogie", "Hollywood Swingin'", "Funky Stuff" and "Open Sesame".
"We decided to re-do that material because we found so many people were 'sampling' the original cuts. Not only that, but since we were making a musical transition anyway, it made sense to include some of the old stuff along with some of the new."

Naturally, one of the more obvious questions for the current line-up involves J.T.'s departure. Over to Kool: "We had been anticipating J.T.'s leaving the group because we'd already talked about him doing a solo album so it wasn't a total surprise."

Adds D.T.: "What happened was that he actually had some physical problems with his voice and he was convalescing: we all felt that was a good time to re-evalute our status together. He left at the beginning of the year although our last date together was in
February when we played a concert in Africa."

An oft-heard comment that during J.T.'s tenure, the group had become almost a back-up band elicits an immediate response.
"Whenever you have someone who's always out front as a lead singer, you're going to get that kind of comment from people because it does create that type of situation. Before J.T. was with us, we got to a particular height and then, with him, we reached another plateau where he was out front — and that was intentional. Now, we're more like a group again," says D.T. emphatically.

IN DRAFTING a replacement, the original game plan was to create two new lead singers. "But what we ended up with was three: Odeen Mays was going to join the group as a second keyboardist but we heard him sing!" smiles D.T. "The other two guys, Gary (Brown) and Skip Martin (formerly of the Dazz Band) are also musicians as well as singers so that gave us an added dimension. Now we have the elements to cover a lot of different musical territories: we've gone from being mainly an instrumental unit to being known for our vocals with hits like "Too Hot", "Ladies Night", "Cherish", "Fresh" and "Misled" (the latter three from the group's double platinum '84 LP, "Emergency ) and now we're a full group, combining both aspects."

Gary, whose background includes work on TV commercials, in clubs around New York and on soap operas, says that being a part of such a legendary team "is a real honour. I've learned so much in the last six months about music and about the business. As a singer to come basically from oblivion is more than I could ever ask for: it's a real challenge being a part of the group."

So far, says Gary, "the audiences have been fine: we know that it takes time for people to become accustomed to hearing a different treatment
of songs they know."

One of the frequent criticisms that has been levelled at the group in recent years focuses on their tendancy towards music that has had more of a 'pop' slant.
Says Kool, "We've heard that — people saying that we went too 'pop' but we didn't think about music from a perspective of the colour of our audiences. It's true that our material during the past seven years or so has been very heavy crossover and we were going for that but it wasn't with the intention of leaving our black base. It turned out that way even though we made the records with everyone in mind.

"Naturally, we want to balance it out and have our black music base as well as maintaining our pop audiences. This new album is like a test for us: we're checking people's response to our new vocalists and we're hoping that the new single, "Strong", will be an across-the-board hit."
SINCE the latest LP is seen as transitional, Kool & The Gang are looking forward to their next recording project. "This record closes a particular chapter: the next one will be the beginning of the next one. We plan to start recording in October for a spring release."

At some point, says Kool, the group will do some special recording projects "like the album we did in the early Seventies entitled "Kool jazz". In fact, we want to spend more time in the studio over the coming years, producing other acts and maybe a little less time on the road!"
After 20 years of performing, Kool laughs: "Hopefully we can maintain this institution by bringing in some new blood and maybe we can franchise the group! Just as long as we still get royalties from what they do, we'll be fine!"

Having such a lengthy and successful history in the business, D.T. says the group is looking forward to concerning itself "more with the humanitarian aspects of life, the conditions in the world and more social concerns."

What keeps the aggregation intact after so long, adds Kool, is "that we have enough harmony between us as people: we care enough about each other and our lifestyles. We share our duties and that way, no one gets burned out too quickly. We also have so many other areas to conquer and that keeps us going."
With the prospect of some European dates and possible appearances in Australia, Kool & The Gang look forward to their next ten years with confidence. "We enjoy being in this industry and having new challenges," they agree, and after just one listen to "Everything's Kool & The Gang" you'll begin to understand how this group has earned its place in black music history. (Blues and Soul David Nathan)