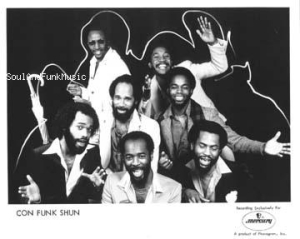 WITH their new album "Burning Love" already proving very 1 popular on import, it would I seem Con Funk Shun have joined the ever-increasing ranks of veteran R&B/funk bands who are really coming to | grips with the new music | technology while at the same time retaining the original qualities that established their status in the first place.


The members of Con Funk Shun have been together since the late sixties and have risen through the ranks of being a popular local band (in the Bay area of California), acting as the backing band for Stax act the Soul Children and then onto | prestigious support slots with the top names in soul.

They have been making albums as Con Funk Shun for a decade now so when I spoke to guitarist, vocalist and founder member Michael Cooper I endeavoured to discover what the particular qualities are that help keep bands like Con Funk Shun (and I Crown Heights Affair and Skyy [ and Brass Construction and all \ the others) popular and in demand.

"For example, we were keen  to use Leon Ware and Billy  Valentine because we knew  they'd be keen to preserve our  appeal for our older audience  the over 25s, the ones who  go way back.

"On the other hand, Billy  Osborne from LTD, he's  Jeffrey's older brother and  Zane Giles are young men who  could cover the new  generation of fan but still  maintain the maturity of sound  we have developed over the years."

THIS all made great sense in theory, I agreed, but could it not put the 1 band in danger of trying too hard to be all things to everyone and not quite getting | any of them right?

"We have one rule we lay I down to anyone who works with us and that is 'whatever you do, in the end it must still be US' it must have the important elements of Con Funk Shun.

"We'll sing what we're told, we'll play what we're told we welcome changes, we love outrage but on the top it must still be quite obviously us who's doing it."

This led on to another important subject in musical survival. After making music for nearly twenty years, do they still enjoy the way the music moves, can they still get to grips with the changes?

"We may all be getting on a bit", laughed Michael, "but we all still go out and party, get in to the right clubs and hear what's going down.

"I also happen to have a teenage daughter I married as a young man and she shows me all the latest dances, how to dress, how to wear my hair, what the kids are saying.

"At the moment she's getting us to move away from what we call our 'Miami Vice' look. She doesn't miss a trick, and nor do we.

"You must also remember that a good proportion of our market is the 15 to 25 age group and we have to move with them."

SO for Con Funk Shun, the simple philosophy of knowing what the right noises are, getting the right people in to help you make them and, of course, having the experience and ability to carry them through seems to be paying dividends for this, one of the music's most durable bands.

However, they are not the first, and certainly not the last, R&B band to stand the test of time. It's a trait that seems at its most rife in black music and I asked Michael if he felt the same principle applied to his band?

"Yeah, I think we have the desire, the staying power to keep our music relevant and although there are, I'm sure, a few rock and pop acts who also do, it certainly seems that R&B bands do hang around.

"I think a lot is to do with the fact that the music is still fundamentally traditional and pretty timeless but the one thing these acts have and that we also have is heart  we want to be there!'

That big heart that Michael speaks of is borne out of many things and not all of them sweet nothings but there are a lot of people who have paid their dues over generations so there can never EVER be too many Con Funk Shun's of this world.