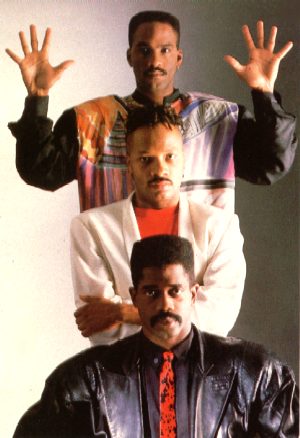 It's one of those times in Larry Blackmon's pretty long, fairly illustrious career when everything must seem to be happening so frustratingly slowly.

Last year saw his band Cameo consolidate ten years of powerful, consistent music with their biggest selling album to date, "Single Life" — not to mention their first hit singles in the U.K., "Single Life" and "She's Strange" — and it now seemed that, at last, Cameo were destined for true international recognition.


So, what does Blackmon do ... he forgets Cameo for a while and gets down to the business of building a new label and pool of talent, recording music with Barbara Mitchell, Bobby Brown and, most significantly, Cashflow (new signing Bonnie Pointer is also imminent on record). And not only is Larry writing and producing and directing videos for his protegees, he's also in the process of mixing probably the most important album Cameo will ever record — the record will show they have truly arrived.

So, with Larry under the sort of pressure that heads of State have nightmares about, when I met him recently on a whistle stop stay in London to record a TV show I expected to see a shattered frame of the man — beaten and worn out by the rigours of excessive endeavour. But... not a bit of it!

"A rose is not a daisy, but they are both flowers", says Larry — well, he would, wouldn't he? — in answer to my suggestion that you can't dance to Cameo's new single "Word Up". Why retort briefly and to the point when something poetic, philosophical and vague can do the job equally as well? But, behind those very big, very dark shades he has a penchant for, it's difficult to detect whether he is being totally sincere or, as is the case with his band's music and image, he is somewhat slightly sending it all up.

Personally, I still reckon it's the former but that can remain the man's little secret and I get down to the business of finding out just what his vision is of the state of play at the moment.

Firstly we established why, just as Cameo had breached the enemy lines, he had halted the attack and called up aA new label, a new pool of talent, writing producing, directing - plus Cameo's most important album ever. A heavy load for Larry Blackmon, but is he worn out? Not a bit of it...brigade of Atlanta Artists?

"Well, it's not as if I've started anything new because Atlanta Artists is a continuation of what I was doing with New York Players — I just changed towns and changed the name.
"Yes, I acknowledge the timing may seem strange but, with the way I organised myself, priorities work on what needs to happen today.

"With Cashflow, I've had the band for two years and felt the time was right — the market was there for their thing — and when I start something I am moved to work hard at it and I'm inspired by the confidence the artists I'm working with have in me.

"In retrospect, I could say yes, perhaps I should have been doing other things ... but you do what you have to do and I'm happy with the experience."

There are positive elements of both conceit and confidence in that answer. Larry also told me about the "Black Mafia" team comprising himself, Tommy and Nathan from Cameo, and 'team' men like Melvin Wells, Kevin Kendricks and Willie Morris — who are notorious in the States for their dervish approach to getting the music out and "showing new bands the right things — not the rubbish". They know they have the ability, the talent and are certainly prepared to put their money where there mouth is. Blackmon and his team are happy to reinvest their money, time and talent, and everyone — including themselves — benefits.

But what of the new Cameo album? Will that also be a beneficiary or a casualty?
"Well, I must admit that this is the longest time spent on one album ever ... we started recording in March. But the success of Atlanta Artists forced us into that situation. However, because we have never worked this way before doesn't make it wrong and, as I said, we tend to let things happen with a natural flow and going off doing other things has kept the new album fresh.

"And, you see, before I start work I have to have a vision — to known in my mind how I want the project to come out — and that means before I get down to mixing the album I don't have to listen to it a lot. In any case, you can get too fussy about something."
As far as I'm concerned, this philosophy should go on to the statute books if the two tracks that Larry played me from the "Word Up" album are anything to go by. Larry planted his Walkman around my ears and hit me with a frighteningly powerful rap called "She's Mine" and a dead catchy, extremely funky cut called "Candy", and then told me "I also have a strong ballad called "Don't Be Lonely" ready and the rest of the album — eight tracks this time — will be mixed in the next couple of weeks.

"Although it's taken a long time, I've particularly enjoyed it because there are some great artists guesting on there. Bernard Wright is playing some keyboards and a real hero of mine, Michael Brecker, plays some wild saxophone".

So despite any fears that the "Word Up" single may or may not have instilled in you, as far as these ears can detect, Larry is steering Cameo along some pretty exciting channels, a theory with which Larry concurs.

"We are not changing anything to capture that market called 'pop' — we have confidence in our ability and we always felt it would come to us.

"I'm still enjoying this as much as I ever did because it is always changing. Imagine the joy of going into the studio to record new stuff — it keeps me constantly fresh.

"But perhaps the most important factor is that I genuinely believe that — where as it was not necessarily the case before — Cameo are now ready to really make it. We've always been here, and now the people are coming to US." (B&S MW no 465 1986)