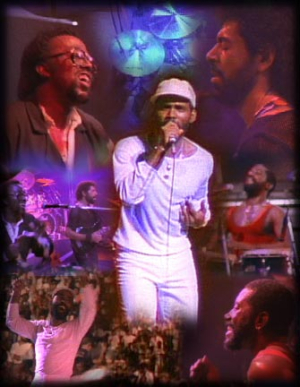 THE timing certainly seems ripe for some changes in the Maze camp. It was obvious with the release of a second "live" album set that
everything was not A-OK with Frankie Beverly and his Maze cohorts.
However, let's first of all dispel the rumour that circulates the most when the names of Frankie and Maze are mentioned. No Beverly solo run!

"It's not even a remote possibility," Frankie responds. "I get asked that question everywhere now, but it'll never happen. Why should I leave? I can do everything I want to do within the concept of the group.

"In a lot of cases, guys leave groups because of an ego thing. I don't suffer from that, thank God! I'm already up front so there's nothing to achieve in that area. We've been together for something like twenty years and we're still happy with each other so I'd say any kind of a split could be classified as an impossibility!"

On the other hand, the rumour that Frankie and Maze may quit Capitol after a ten year tenure is a distinct possibility. It's been an open secret for years that the group has become increasingly frustrated with the company's inability to break them into the more lucrative crossover market.

"It's more that we don't see the company's intent in that area," Frankie points out. "If I saw that, I could live with it, I think. But the way that we are accepted in England and Europe proves one thing — we have the potential to appeal to a wider audience. Every time they tell me whites don't like our music, I just have to remind them about England!

"Obviously, after ten years with the company, I am reluctant to just move for the sake of moving. But it may be necessary. It's certainly time to start looking seriously at our next move.

"And the decision has to be based on several things — certainly not money! It has to be the right career move. I am an artist and I want the maximum opportunity for exposure
that is possible.
"Right now, I am not happy with our relationship with the record company and that eventually starts to affect our relationship with our public. That's the time to sit back and take stock of the situation. We have an obligation to give Capitol one more album and we'll live up to that obligation.
"Who knows ... maybe we'll give them a Christmas album or something like that. I've always wanted to do some Christmas standards and I've written two or three Christmas message-type songs. So that's a possibility."

THE "Live In Los Angeles" is the second "live" set released by Maze. Several years ago, they treated us to "Live In New Orleans", an album that is, in my humble opinion, the best "live" album of all time. Certainly, I regret to say, a superior album to "Los Angeles".

"We gave it our best shot and it was our best effort," Frankie says. "The film is actually better than the album but unfortunately — here we go again! — the company has been slow in getting the video on to the market. The vibes were somehow different from the New Orleans concerts.

"Immediately prior to the recording in Los Angeles, the band had really been cooking and I thought this was going to just be a super experience. Somehow we just didn't perform as well as we are capable of performing. I really don't know. Maybe we were just looser in New Orleans, but there was something special about
that album. I was 100% happy with it.

HAVING just completed a mini- American tour frankie and the Maze guys are heading your way this month.

"Oh, I guess our show has changed a little since the last time we were in Europe," Frankie states. "We've added a few new songs and deleted a couple. But the essence will still be there. It'll be that gritty Maze — that's something that will never change, we'll never lose that.
'As good as you may think our albums are, Maze has always been and will always be essentially a 'live' band. That's when we're at our best.

"I'm thankful that we're still popular in Europe. We always enjoy going there because the fans are so appreciative.

"Once we get home to San Francisco, I plan to keep the band off the road for a while. Whatever happens with our record company situation, I know we need a new studio album soon so that has to get priority.