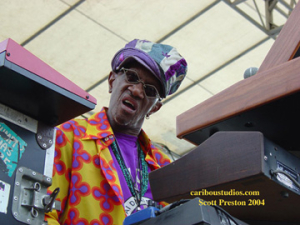 In many circles, Bernie Worrell needs no introduction. From his work as a founding member and Musical Director of Parliament-Funkadelic to his contributions to the Talking Heads, Worrell has been inducted into the Rock and Roll Hall of Fame. Indeed, songs such as “Burning Down the House” and “Flashlight” wouldn’t have been the same without him, and Worrell’s keyboard prowess has only grown since those classic recordings. As one of the most sampled musicians in history, Worrell’s funky licks have graced hit songs by Dr. Dre, Snoop Dog, Ice Cube, En Vogue and more. “One generation needs to segue to the next generation. So now I work with the sons and daughters, and we coincide.”