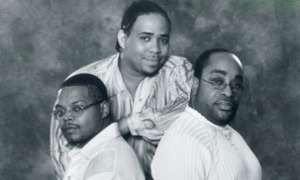 Pieces Of A Dream is emerging as a highly pertinent tag for the supremely talented group of musicians who create music under that banner.

For the generation of black music fans of the last decade, it has been a personal pleasure to watch this band emerge and develop 'before our very eyes', so to speak.

They came together as teenagers under the guiding hand of mentor Grover Washington Jr. (probably as big an inspiration as any for the enthusiast who's spread his wings wider than the commercial edge of the genre), and started playing a form of jazz that introduced all the musical aspects this generation has enjoyed into one sound. Pieces Of A Dream almost personified what — in this country at least — was considered best in black music, and they became as a mirror for the music's followers.

Amazon.com Widgets
But since those early days, Pieces Of A Dream have continued to move — as indeed their audience has — and you can witness their development like parts from a jigsaw puzzle — pieces of a dream — slotting together to slowly but surely create a picture, the perfect image for them.

SO FAR, it's been comer bits and 'sky' — the parts of a jigsaw that you do first to act as your guideline — that have been slotted together. The band have been doing what they know best and are most comfortable with up until now. But the album that is set to really start clarifying the picture and shaping the dream has arrived and it's a recording that moves away from flat sides and blue vistas and sees Pieces Of A Dream heading in a direction that could ultimately be their making or their downfall.

"Joyride" sounds like one hell of a quantum leap for Pieces Of A Dream — that part of the jigsaw that some may suggest you approach with scissors and a sledgehammer to make the pieces fit — but on speaking to the band's singer Cedric Napoleon and arranger (on all of their recordings and member of the live show) James Lloyd it became clear that no such thoughts had apparently entered their heads and that, in the choice of album title, they had once again came up with a completely appropriate tag.

Firstly, Curtis dismissed any false illusions that Pieces Of A Dream are any one thing, or ever have been. "For us, just being a jazz trio wasn't always it and I think that we have never pretended it was. From the first album onwards we have done lots of different things and, although our overall sound may be jazz, that has never been all of it.

"And I don't think that situation has changed on this new album." Cedric then went on to say "we have always wanted to develop into a commercial entity" which, for me at least, puts "Joyride" into it's correct perspective. It's an album of synth sounds and computer beats and catchy tunes and high class performances ... and I got the impression that the band really did enjoy the ride.

But, as Cedric explained, they weren't the first to buy a ticket on the high-tech roller coaster.

"A lot of the production work on the more synth stuff was done by Lenny White (sometime jazz drummer, sometime hitmaker) who also did a lot of the work on Bemarc Wright's album. In fact, Bernard wrote the track "Say La La" for us and we enjoy his music a lot."

PARALLELS abound with this information to hand. For equally talented jazz teenage protegee Wright, it was a matter of new label, (as it happens, also Manhattan), new technology and new sound and also a new production associate, in the shape of one Lenny White. On his debut for Manhattan, Mr. Wright, Bernard managed to find a place where new met old and no-one could spot the join.

And with hardly any trouble — "the new technology was very comfortable to work with, although it was just slightly restrictive on our playing" says Cedric — Pieces Of A Dream have found it a fun place to be as well.

Indeed, when I spoke to James Lloyd, he made a very sober judgement about the situation and at the same time touched on a perhaps even more pertinent point.
"Listen, when it actually gets down to it, what it really boils down to is the sound — not the technology, not instruments. That's what Pieces Of A Dream have always been about and why we succeed in so many categories.

"This album is also important from Cedric's point of view because it was time we began to bring him on as a vocalist."
Cedric also confirmed that "Joyride" was "good for my singing — that's why I'm particularly pleased with it". I think we can conclude from this that, in spite of who's banged what to get which sound, Pieces Of A Dream are moving from being an instrumental combo to a song band, doing what they have always done so well but enhancing it with a song, and a catchy melody.

THUS the picture is emerging of an outfit whose virtuosity is unquestioned, who have a keen ear for a contemporary sound and who know that the added ingredient of could carry Pieces Of A Dream another step nearer to their ultimate goal — the place where everything 'really' comes together.

"We will always keep jazz as our root", insists Cedric — a fact made clear by last year's live shows and no doubt set to be endorsed at Hammersmith and at the B&S Beach Boogie in Blackpool on August Bank Holiday Monday and that's as clear as day on     "Joyride" (and everything else besides). It seems to be coming together and Pieces are looking set to make their Dream a reality. •James Lloyd also explained why Pieces Of A Dream have done George Michael's "Careless Whispers". "That was Cedric's idea — he said Miles Davis did it with "Time After Time", so why not us."(B&S 463 MW)