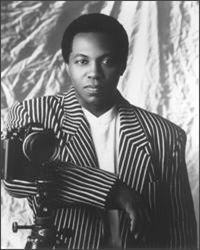 Master drummer/producer Norman Connors has been away from the recording scene for almost six years now but out of studio doesn't mean out work. The man who first brought the likes of Phyllis Hyman, Michael Henderson and Glenn Jones to public attention vai his mid-Seventies albums for Arista and Buddah is quick to point out that he's been performing pretty consistently throughout that time.


"For the first few years after I stopped recording (in 1982), I did a quite a number of shows. As time went on, the gigs were less and I did, mostly club dates," notes Norman, winding down after a day full of interviews at Capitol Records' L.A. offices. "I also did get over to Europe duing that period — I spent quite a little time in Paris and I was in the process of putting together a whole European tour when I got a call that resulted in my going back into the studio."

The fortuitous telephone conversation came from saxophonist Marian Meadows, a member of Norman's band. "He let me know that a friend of his, Melviny BoykinsLwas_prepared to invest some money in me recording again. That was in 1986 and he put $50,000 into the project. We came up with six songs and recorded them in New Haven, Connecticut with the plan that once we had finished product, we'd check out the companies."

With a track record that includes 1975' million-selling "You Are My Starship" album (which contains Phyllis Hyman's definitive version of The Stylistics' classic, "Betcha By Golly Wow") amongst the thirteen albums Norman recorded between 1972 and 1982, Norman didn't have a shortage of offers.

"Actually, three companies wanted to take the product but I opted for Capitol for a couple of reasons: the executives at the label made me feel real special plus they were real fans of my music. That always makes a big difference. We also talked about me producing some of their acts - like Angela Bofill, which I'm currently doing."

Once Norman's deal with Capitol was in motion, he went back into the studio to finish off what has now turned into the album, "Passion". As in the past, Norman has two featured vocalists - Spencer Harrison and Gabrielle Goodman.
"I met Spencer in Philadelphia, which is my hometown — I moved back there a few years ago. I was at a restaurant and I heard him and I knew he was the right guy to sing on this project.

"I first heard Gabrielle about four years ago. At the time, she was just 18 and I was really impressed with her intensity and her vocal skill with jazz. I was performing in concert and she called to ask if she could sing — and she was definitely ready."

The two vocalists duet on "Heaven In Your Eyes" as well as soloing on a number of tracks on "Passion": Spencer's vocal contributions include the EW&F classic "That's The Way Of The World" whilst Gabrielle's selections include the late Minnie Riperton's 1975 hit, "Lovin' You".

Explains Norman, "We'd been doing the EW&F song at the end of my show for a while. Originally, it was an instrumental with Spencer just singing at the end: we always got such a great response that I knew it was a definite to record. Then, "Lovin' You" is a song I've wanted to cut for a number of years — I was just waiting for the right voice and Gabrielle was the singer who I knew could do it justice."

"Passion" has already been receiving great response in the States, prompting the inevitable questions about Norman's absence from recording.

"People tell me they're glad I'm back," Normal smiles, "but I don't feel like I went anywhere. After the "Mr. C" album on Arista in 1982, I just felt it was time to stop and let the creative juices flow some."

Norman admits that some of his latter day work for the label was received with markedly less enthusiasm than albums like "This Is Your Life" and "Romantic Journey" and he notes that "the last few albums just weren't promoted that much."

However, with a new appreciation for the kind of fusion of R&B and contemporary jazz that has emerged in the last few years, Norman's music seems to be much more in vogue now. "Maybe some of my albums would have been gold or platinum if they'd been released now," he reflects. "But I feel that "Passion" reflects my natural progression and evolution. That time off from the studio definitely helped me to grow and educate myself — I don't think you can ever stop growing musically."
WITH HIS recording career back in gear, Norman's turning his attention to his production skills. "I'm doing at least six tracks for the first Angela Bofill LP for Capitol and what we're doing is taking her back to the kind of music she made on her first two albums back in the mid-Seventies. Working with her is great — it's something I've wanted to do for a long time.

"Then, I will most likely be doing some tracks on Be Be & Ce Ce Winans, which is definitely something different for me: I don't see any musical conflict just as long as the lyrics reflect what the message they want to deliver."

Norman says that one of his main plans for the future revolves around doing different kinds of albums himself.
"I'd like to get to a situation like Herbie Hancock — where I can do something real experimental on one album and then do something real commercial on another. I'd love to do a record with a full orchestra and then maybe something with an artists like Stanley Turrentine. I feel that with Capitol I'm going to have that opportunity."

There seems little doubt that one of Norman's biggest claims to fame is his obvious ability to present the music buying public with some truly great vocalists: anyone who can bring Jean Carne to a mainstream audience — as he did in 1975 — or help launch the career of a premier vocalist like Phyllis Hyman is no fool!

"Well, I actually see myself this way: I'm a musician first, a producer next and then I happen to have a good ear for quality singers. I listen for a particular clear sound, how someone interprets a lyric. I don't think of myself as a talent scout particularly, just more someone who loves and respects great performers."

As ever, Norman's 'ear' for quality is evident once more on "Passion" and signals a welcome return for this musical maestro. (DN B&S April 1987)