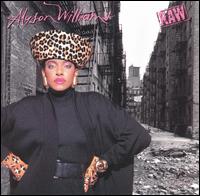 To soul fans, and particularly Soul and Funk Music.com visitors, Alyson Williams is no newcomer. Featured on duets with Def Jam labelmates Tashan, Chuck Stanley and Oran 'Juice' Jones and part of the "Soul Songs" tour in 1987, the soulful lady left an indelible impression on European music lovers through her varying different musical excursions.
Now, you'll be pleased to know, you can get a whole album which features (for the most part) the truly amazing vocal talents of Ms. Williams: her debut LP has finally been released in the States, where only the more discerning record buyers have noted her name hitherto.


With some out-and-out stunners like "Just Call My Name", a great version of the old Moments/Linda Jones cut, "Not On The Outside", a duet with members of vet soul group Blue Magic entitled "We re Gonna Make It", a stirring duet with Chuck Stanley on "I'm So Glad" and a sizzling dance track, "My Love Is So Raw", Alyson delivers the goods — not she notes, a moment too soon!

"Well, they say good things come to those who wait!" laughs Alyson heartily. "But seriously, Russell Simmons (head of Def Jam and the guy who featured Alyson on his first production in 1982 on "Action" by Orange Rush) and I wantd to wait for the proper material. We started this album a couple of times but we wanted it to be right. Sure, I wish it could have happened sooner but then, I do believe everything happens in its own right time."

Alyson adds that she wasn't always so placid about not having an LP out.
"No, it was not easy but I understood why we were waiting. I'd go off sometimes and voice my grievances in not always the nicest way! But I tried not to get too upset — I just felt that with an album out I could go back over to Europe and work even more readily. I realised from going there a couple of times that there's such an abundance of talent here in the States and that, in Europe, people are starved for what we re used to."

The New Yorker's road to her debut album has definitely had some interesting turns in it which have included being a part of a recording act with Meli'sa Morgan for Capitol Records, singing backgrounds with British rockers Gang Of Four, having a several-month long residency at a Paris nightclub and being road manager for Oran 'Juice' Jones!
"Hey, the landlord loved the fact that I could sing but he wanted to know, 'where's my check?' — so I had to go away and do gigs, which is another reason it took a while to put this album together."

As the daughter of jazz trumpeter and bandleader Bobby Booker (who worked with Count Basie, amongst others), Alyson was exposed to music at an early age, stating that her favourite vocalists included Gladys Knight, Nancy Wilson, Patti Labelle, Aretha Franklin, Phoebe Snow, Laura Nyro and "in my early childhood — Dakota Staton, Dinah Washington and Billie Holiday."

After her initial foray into the studio with Russell Simmons in 1982, Alyson joined High Fashion (the Capitol Records' act that featured Meli'sa) whilst doing sessions with artists like Melba Moore, The Commodores and Evelyn 'Champagne' King.
Somewhere in between, "I worked at different record companies, I worked with (hit producer) Gene Griffin and his 'Sound Of New York' company. But I was blessed enough not to have to take another job — I've always made my living from music and I haven't had to do anything for the phone company to pay the rent!"

It was during a visit to Italy to record a second High Fashion LP in 1983 that Alyson decided to stop off in Paris. She chuckles at the memory.

"The musical 'Your Arm's Too Short To Box With God' was playing in Paris so I went there to hang out for a minute. Me and members of the cast would stop off at different clubs after the show and sit in. Well, eventually, my little francs were dwindling and I'd heard that the French audiences loved black entertainers so I went down to this club, Memphis Melody, got some of the guys from the musical to back me up and stayed there for a couple of months!"

After that, six months with the Gang of Four in the U.K.: "I thought I would go deaf, but I didn't!" Alyson laughs. "But it was good because I hung out a lot with the road manager when we toured England, the U.K. and the States and I saw the big differences between the response to rock and R&B acts in terms of how they were treated."

Off the road from her jaunts with the British new wavers, Alyson had one single out in the States — a version of the old Pointer Sisters/Lee Dorsey hit, "Yes We Can Can", on Profile Records before she began working again with Russell and his ever-growing Def Jam stable. "It is funny because I became Def Jam's resident female vocalist and I don't make any separation between me and the rap acts — I'm sure they must all think I'm at least 100 years old, they're so young!"

After her spell as road manager with Oran 'Juice', Alyson worked fastidiously on the "Soul Songs" tour, having already recorded duets with Chuck Stanley ("Gonna Make You Mine Tonight") and Tashan ("The Right Attitude"), involving herself in the staging and choreography for the show as well as being the resident stylist.

"We did just one month in Europe and played one show here in the States at New York's Bottom Line and the whole thing was great." Rave reviews followed — but still no Alyson Williams album!

"That same year, I did another duet with Juice — "How To Love Again" which was on his second album. Since the duet was also on the soundtrack for the movie, "Less Than Zero", I actually got my first gold record before I had an album of my own!" Alyson roars.
Now that the aptly-titled "Raw" is finally out on the streets, Alyson says she's very happy with what's on the album. "There's nothing on there I didn't want to do. My only regret is that I did a duet with Chuck Stanley on the old Miracles' song. "I Second That Emotion" with a great Go-Go beat and that didn't make it on | to this album, but hey, I can still do the song 'live', right?"

Alyson feels that her LP is "more traditionally R&B — we did this album with new beats and all but I really feel I struck home when I did more traditional, though not necessarily predictable, vocals. If I'm not a part of a new breed| of more traditional R&B-type singers, hopefully I'll start a trend!"

As the current 'pet' project at Def Jam and a high priority for CBS in the States, a good deal of attention is being paid to her album.

"I love it!" Alyson states cheerfully. "You see, I want to make a mark in this industry in the long run and have a real kind of longevity. You know, when I grow up I want to be like Ella Fitzgerald! Don't forget I do have that jazz background and although I like to do high energy, dance grooves too, if I had a choice, I would probably just sit and do standards all day long. One day, maybe I'll even do a whole jazz album."
In the meantime, "Raw" represents the grit 'n' silk of Alyson Williams on a super collection of material that is clearly just the beginning.

"I hear some people say they don't want to be famous but I do! I always wanted to be inmusic and to be an entertainer so I can make a difference with in a lot of different areas."

Alyson demonstrates with complete capability that there's one area where she's already making a big difference and that's bringing some serious satisfaction to her British fans whose patience has finally been rewarded. (DN B&S 1989)