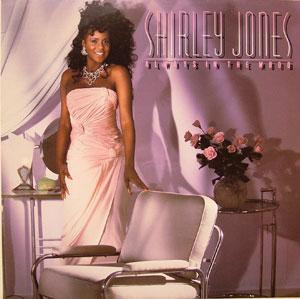 JUST in case there are still people who have yet to hear the news Shirley Jones is back in the fast lane and moving up through the gears like Nigel Man sell on a good day! The former The Jones Girls who, with sisters Brenda and Valerie, endeared themselves to a generation via their unique mellifluous soulful vocals as showcased on such classic tracks as "You're Gonna Make Me Love Somebody Else" and "Nights Over Egypt" was reaping instantaneous rewards following the release of her debut solo album "Always In The Mood" and the initial offshoot single "Do You Get Enough Love".

Both the releases has secured the type of critical and public acclaim that most artists would willingly strangle their grandmother for but gladly any such dire and extreme methods were not required to elevate Shirley's newly acquired solo status. However, even the most accomplished of entertainers, having spent their entire professional career to date within the comparative safety of a family trio, must have the occasional reservation? "Are you kidding? exclaimed Shirley breathing down the transatlantic telephone in that oh-so-sensuous voice which has provided weighty ammi for any number of optimis fans' fantasies. "I was te but I knew it was a make or break situation for me and one which I just had to overcome if I was to continue as an entertainer.
"It wasn't just the fact of being alone out there ? although that is a pretty scary situation in itself but it also involved a change of register for me. When I sang with my sisters I tended to concentrate on the high registers but being a solo artist means that I'm able to use the middle and lower registers, which is preferable. I still use those high shots, of course, but more for effect and emphasis. The upshot is that I'm now quite relaxed performing solo.' SHIRLEY'S recording success is also a welcome result for Philadelphia International Records with whom she and her sisters made their initial breakthrough back in 1978 when they released the album "You're Gonna Make Me Love " Somebody Else" which spawned the hit title track single and paved the way for their ensuing success. A welcome return to the fold, we presumed?
"Oh yes, very definitely" purred Shirley "and something of an emotional return too. Everyone who was involved with Philly during the 70's was part of the Gamble & Huff family and we were all devastated when it shut down. In fact it was the demise of Philiy which really brought about the break up of the Jones Girls, "When we signed with RCA Records after that we were optimistic of better things to come out vze album un Target" proved to be a real disappointment to-us and probably RCA toe and it certainly wasn't high point in our career! "We all got pretty fed up at that period and it was a real watershed situation for U3 all. Eventually. Brenda decided to get married and moved to Atlanta and Valerie opted to go to college and continue her education which left me checking out my options.

"In all honesty, I'd never really considered giving up the business but I came pretty close to doing just that. I checked out a number of companies and discussed a solo contract but none of them made sense. I'd actually almost agreed to sign with a company when Kenny (Gamble) spoke with me. After that, there wasn't too much conscience-searching and everything about the liaison seemed and felt right. "The excitement is still there and I really believe the old Philly magic is ready to repeat histor/. The new set in terms of the artists roster is exciting too with the O'Jays and Phyllis Hyman and the Whitehead Brothers who are the two sons ? aged 14 and 17 ? of Jon Whitehead of McFadden & Whitehead. I'm just delighted that I've started off my solo career with Philly and have been able to do my bit in re-establishing the label." (B&S)