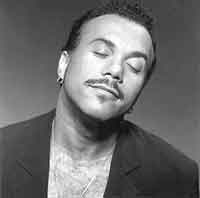 OFTEN, when a lead vocalist leaves a successful group, it comes as surprise to the rest of the world. However, there are usually very strong underlying reasons that simply didn't come to the attention of the public. Certainly, that was true of the Lionel Richie-Commodores and Jeffrey Osborne-LTD splits. And, to a lesser degree, it's the case in the {safm}Howard Hewett{/safm}-Shalamar parting of ways. "But it all ended on a happy note," Howard is pleased to point out. "At least, as happy as any split can be. I guess there was as much bad feeling about me leaving the record company as there was about me leaving Shalamar. But that tension is past now ? we worked out all of our differences and we're all friends.

"My place in the group has been taken by Sid Justin and I wish them (Micki Free and Delisa Davis) all the best with their future." In the case of Shalamar, of course, this wasn't the first break-up. "That's right ? when Jeffrey Daniel and Jody (Watley) left, I think it was even more of a split. Things changed overnight." That split resulted in some well-publicised ill feeling. "In that case, too, everything has been resolved. I'm in constant touch with both of them and we ironed out our problems. We're like brothers and sister, really ? we grew up together. But growing up brings responsibilities with it.
"It wasn't that I disagreed with them leaving. In fact, I always felt we would all end up going solo. I just felt the timing was bad. If we had stayed together for ten or eleven more months and completed all of our tour commitments and maybe done one more album together, everything could have been properly planned."


As it was, Micki and Delisa were hurriedly drafted in Jeffrey and Jody's vacancies and an album, "Heartbreak", was released ? to rather critical unacclaim! "I felt the need to do one more album because I didn't want the Shalamar concept to end on such an unhappy note, felt the album was musically good ? maybe not great, though. It was difficult trying to balance what I wanted and what Micki and Delisa wanted when we really didn't know each other very well. "And then there was a tremendous amount of pressure being exerted by the record company for a new album. I understood their reasons, of course ? but it didn't help. Looking back, I feel now that the album was also cheating the public, too ? since two of the eight tunes were from 'soundtrack' albums, we were really onl^r giving the public six new tunes. That's one of the main reasons why my solo album has ten tracks on it. It's like a payback!".