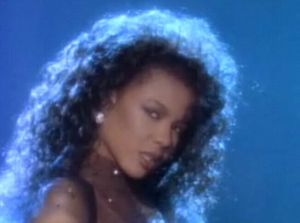 WHEN IT comes to making quality music, Angela Winbush is no slouch. As record buyers on both sides of the Atlantic discovered when the former member of the hit duo Rene & Angela released "Sharp", her first solo LP, in 1987, the lady's talent as a producer, songwriter and vocalist clearly put her in a class of her own.
Following the success of "Angel" (a No. 1 U.S. blackmusic hit) and subsequent singles such as "C'est Toi" and the super-soulful duet "Hello Beloved" (recorded with Ronald Isley of the legendary Isley Brothers, who is also Angela's personal manager), the St. Louis-born star has put her hit stamp on records by Sheena Easton, Stephanie Mills and The Isley Brothers.
In'deed, she had the recent distinction of watching as two records she produced ("Something In The Way You Make Me Feel" by Stephanie and The Isleys' "Spend The Night") fought to gain the top slot on the American black music charts. Stephanie won out and all the signs are that Ms. Winbush is headed for the some No. 1 slot with her latest release, an infectious cut entitled "It's The Real Thing" which is also the title track from Angela's second solo set.

Like its predecessor, "Real Thing" is pretty evenly divided between some serious ballads ("Please Bring Back Your Love" and "Never Be The Same") and some tasty grooves ("Lay Your Troubles Down", another duet with Isley, and "No More Tears"), with the jazzy "Precious" and the gut-wrenching "I Have Learned To Respect The Power Of Love" thrown in for good measures.

In other words, Angela's new album is on a definite par with her solo debut."I structured the songs on this new record so they'd be more of a challenger this time," the lady says in an interview that took place in the prestigious Holloywood studio/office complex that she and Ronald (Isley) are in the process of having built. "I felt like I had a different point to prove with this album."

ANGELA is aware that the release of her first LP was the first real opportunity record buyers and the music industry had to see the real diversity of her musical talents, especially since she had been a part of a hit-making team.

"I was definitely under the pressure of proving myself. There were a lot of questions that people had about whether I could really do an album by myself. Since "Sharp" did pretty well, the point I had to prove this time was that I could be a producer of other artists and still do what it took for my own records."

Indeed, since "Sharp", Angela's success as a producer of others gave her very little breathing space and she says that she literally went from one project to another, non-stop. "This past year has irealy been about establishing my credibility as a producer," she admits.

"After The Isley's album "Smooth Sailin'" went gold and then I had hits with my own records, I got a lot more calls to work. In fact, since last October, I've been in the studio pretty much without a break: I recorded tracks with Stephanie, Laylah Hathaway (daughter of the late great Donny, for hex Virgin Records' debut), Sheena, a new MCA group Body, then The Isley's LP ("Spend The Night") and finally my own!"

Angela says that working with others actually provides a stimulus for her in terms of writing "because I'm under pressure to come up with material for each project" but that some of the material on "Real Thing" was developed during the recording process for the LP which began in May.

"I definitely came up with some different kinds of songs, things I hadn't done before and I felt that I took my music one step further, that it was more mature, that this album reflected some growth and development."

THE ONE song on the LP that isn't brand new is "Learned To Respect The Power Of Love" which is * given a powerhouse rendition by its author. Originally recorded by Alton McClain & Destiny in 1978, the song became Stephanie Mills' first ever No. 1 hit in 1986.

As Angela explains: "It was actually Ronald who pushed me into doing it. He heard me playing it and singing it at the piano and he felt I should go , ahead and record it. I felt comfortable cutting the song — but then, it's been with me since my years studying at Howard University.

"But I'd have to say that the I did it on the album is really closest to how I originally planned it to sound when I first wrote it." Angela's performance on the track is just one more example of the extraordinary vocal style that she's created, one that includes holding notes for what seems like an eternity!

She laughs when asked to comment: "I didn't plan to hold the note on that song for quite as long as I did — it just came out that way! Actually, I first
discovered that I had good breath control when I was in High school — my music teacher told me I could really developt it further — and when I went to Howard, my teacher there (who had previously worked with the likes of Roberta Flack and Donny Hathaway) encouraged me even more to work on breathing which is probably why I can hold notes for quite a while."

DESCRIBING the material on "The Real Thing" as following "the theme of independence, of a woman in the Nineties deeding with love and relationships", Angela says that her current focus is definitely on her work as a recording artiste.
"Wearing different hats — as a producer and writer as well as an artiste — can cause a conflict in terms of time, but I'm definitely putting my attention on my album right now. I want it to get total exposure, to get mass acceptance without any restriction and I'd like to see it be a multi-platinum record," Angela states with candour.

"With my first LP, I definitely did what I set out to do. Now I want to take this record to the next level."

Symbolic of her commitment to making "The Reed Thing" a major hit, Angela says she plans to tour both domestically and in Europe "within the next few months".
The future, she says, will include "developing my production company — we have two artists arleady signed, Derek Brinkley and Raymond Reeder — and since I have production deals with both MCA and Atlantic, I guess I'm going to be pretty busy! But that's fine, because I do want to be in the entertainment business for a long time. Eventually, I'd like to get off into making films, into writing and directing."
If "The Real Thing" is any indicator, Angela Winbush should have no problem Whatsover in sustaining a long and rewarding career in the world of entertainment. For once, this is an album whose title defines its contents! (David Nathan B&S 547)