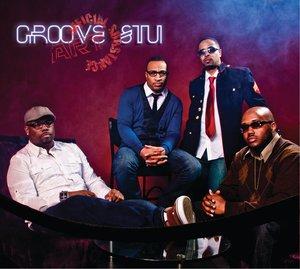 Omar Sharif of the American band 'Groove Stu' send me their album for a review which I received just before my holiday. Normally my approach is to skip the tracks on a CD to get a first Impression. But this time I used a different approach. I listened to the CD when cruising to Austria for my yearly holiday with my family. This album made me very relaxed, even for my kids;-) The miles/km flew by. It was apparently a good idea to do it this way.

The journey starts with the first great track on this album 'Thing Called Love' a song with beautiful vocal harmonies. Next track 'Take A Chance' has the same ingredients as the previous track, nice guitar licks and vocals.The Featherstones produced track #3 'Make Believe'. The string arrangements on this track are smooth, the same is true for their other slow production 'Where I Wanna Be' (one of my favorites). 'Perfect Time' is a track that Groove Stu collaborated with an other producer name JSOUL. It results in quiet but still a heavy track due to the drums. The next two tracks 'Back In The Day' and 'Ebony Superstar' are urban style songs the latter produced by The Institution. An other favorite Track is #8 'Places' that could be a 'Tony! Toni! Tone!' tune. Mellow, great vocal arrangements. Groove Stu is an all-round group they could not only play great soul, urban tunes but also superb Jazz. Check #10 'Ain't Worth A Thing' and the following track 'How You Want This?'. Full of Jazz instruments Organ, Jazz, Piano etc. My absolute favorite track of this CD is track #12 'For You'. A very smooth production with beautiful vocals and instrumentation. It's just one of 'Surface' productions (happy). With this track on my radio I drove my car in a trance, after it finished I think I missed about 10KM ;-) 'Make It last' is also a soulful track with nice music harmonies. 'Celebration' is funky track so is the last track on this album, the Prince look-a-Like tune 'Come & Go With Me'. I forgot to mention the great Dance track 'Get Right' an absolute killer tune. My holiday did start very well with this album by 'Groove Stu'.

The Band 'Groove Stu' consist of vocalist/keyboardist Omar Sharif, drummer and multi-instrumentalist Robert Levine, vocalist Jerrod Simpson, and saxophonist Brandon Moultrie. Their first album was called 'Authentic 4.10 Sessions' released in 2003. They also released a concert DVD called 'Live and Direct' from Baltimore in 2006. The planned 2010 'Still Here' project was aborted and never released but several songs from that project did make it onto the Artofficial Substance project.. Now they are back with a new set of 16 hot tracks on their brand new album.

This album by 'Groove Stu' is a great mix of Quiet Storm, Soul, Urban, Jazz, Funk and Dance tunes. 'Groove Stu' is set to release their new album "Artofficial Substance" on September 18, 2012.