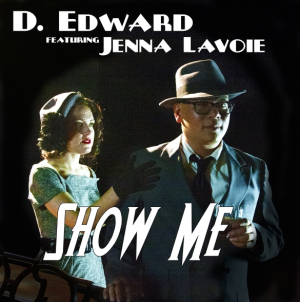 Oakland, CA – Hot on the heels of his critically acclaimed 2014 solo album 'Love Is', Con Funk Shun percussionist and singer-songwriter D. Edward is releasing a soulful new single and video titled “Show Me” featuring Jenna Lavoie! 'Love Is' was released worldwide on October 21st, 2014. The album was two years in the making and features catchy hooks and grooves with a familiar, yet unique and modern pop and retro soul sound. D. Edward has the ability to sound different on every song yet maintain his own signature style throughout.

“ 'Show Me' is a soulful duet, featuring Jenna Lavoie, who is an up and coming singer songwriter from San Francisco. It’s a hot and steamy song about a couple’s passion for each other. An old school inspired love song with a modern musical beat. I really wanted a duet on my 'Love Is' album and I felt this sexy groove would be perfect for that. It was just a matter of finding the right lyrics and voice… and Jenna appeared. I love her flow and I think our voices complement each other’s. It’s one of my favorites from the album and has been a stand out in many reviews.” - D. Edward

An Oakland California native, D. Edward began his musical journey growing up in an eclectic musical household, influenced by what his parents and older brothers were listening to on the radio and on records. These influences included old school R&B/Funk, Soul, Pop, Hip Hop, Country, Latin and African music, as well as crooners like Frank Sinatra and Dean Martin.

D. Edward’s career thrived in the 90's San Francisco Acid Jazz scene for many years playing percussion and keyboards, and he co-produced 2 CDs with a group called Know Jazz. During this time D. Edward recorded with celebrity DJs Jay-J and Julius Papp on 'The Shuffle - EP Vol. 1'.

He is an accomplished percussionist and currently tours with legendary R&B/Funk group Con Funk Shun. He is also currently working with 2013 Grammy winner Laura Sullivan on her new project and has worked with Genevieve Goings from Disney’s Choo Choo Soul, Actress/Singer Brely Evans, DJ Alex Mejia, Grammy winner Samuelle of Club Nouveau, Songwriter Taura Stinson (“Black Nativity” “Rio2”) and Grammy nominated producer PC Muñoz D. Edward's first solo CD 'Little Red Box' gained radio airplay around the USA. His song Truly broke the Top 20 of the FMQB Adult Contemporary Chart and his album topped out at number 21 on the SmoothJazz.com Top 50 Radar Chart. Currently, his 'Love Is' album is at #30 on the SmoothJazz.com Top 50 Indie Chart and the first single “Love Is” is still being played at radio stations around the world. His new single “Show Me” is being added to radio as well. In November 2014, he won the Oakland Indie Mayhem People’s Choice Award, garnering more votes than 1400 other submissions.

D. Edward is also on the Board of the Keep Music Rockin' Foundation, which helps to raise funds and offers educational clinics to the music student/programs of the San Leandro Unified School District and the Board of the Balanced Breakfast local music meet ups that started in San Francisco and Oakland and is expanding to other cities like, Los Angeles, Boston, San Jose and Toronto, Canada.