News Ads Articles Reviews From The Past 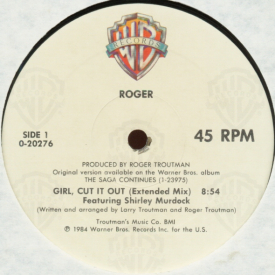 Roger Troutman 's 12" 'Girl, Cut It Out' is the current sensation in the discotheques in the Netherlands. Roger sings, together with guest vocalist Shirley Murdock, on top the electronic rhythms.

Available as US import Shakatak's 12" 'Down On the Street' in an extended US remix, remixed by Sergio Munzibai and John Morales (M&M).

This month the new album of Maze will be available. This album is called 'Can't Stop The Love'.

American Gypsy just released their new single 'You're in my System' on Boni/Break Records. This track is recorded three times on tape before they decided to release it.

Barbara Pennington released her new single 'Way down deep in my soul'.

The Record Shack label will reissue some classic disco cuts with new mixes the next months. The first reissue is Space with 'Magic Fly'.
This news is from the month February of 1985.