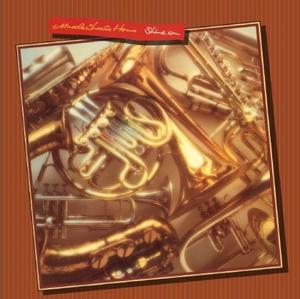 First Time Ever onto CD for Muscle Shoals Horns 1983 album "Shine On" Muscle Shoals Horns’ 1983 album Shine On has been Expanded and on CD for the First Time Ever Expanded with 1 Bonus Track Liner Notes by Alex Henderson Re-Mastered from the Original Master Tapes by Sean Brennan, at Battery Studio’s, New York Shine On is a 1983 album by Muscle Shoals Horns and the original releases became their last album for Monument Records. Their amazing LP, Shine On, contains the musical highlights "Celebrate, Recreate, Participate," "Don’t Bust Yo’ Bubbles" and "She Was Once My Woman." Delicious horn arrangements are what grabs the listener instantly throughout the recording, and becomes the kind of production you would never expect in 1983, a year dominated by the electro feel. This surprising fusion of the nasty JB's with the smooth Shakatak is a real treat to the hardcore lovers of Soul Music. Muscle Shoals Horns were smoothly earthy and jazzy but cleverly brings out you wild side by blowing your party head off with contemporary killer grooves like "Don’t Bust Yo’ Bubbles". This rare release will forever grasp you, by make you wanting more and a classic gem you always want to keep in your collection!